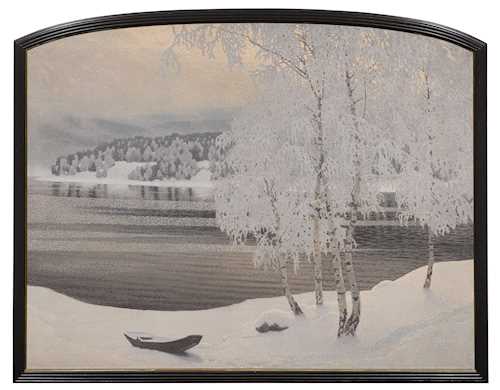 The painter, tapestry designer and carpenter Gustaf Fjæstad was born on 22 December 1868 in Stockholm. Fjæstad was one of the leading Swedish painters at the turn of the 20th century. After studying art, he assisted Bruno Liljefors in creating depictions of animals at the Biological Museum in Stockholm and then Carl Larsson in completing frescoes at the National Museum of Stockholm. In 1898 Fjæstad married the young artist Maria Hellén. In search of unspoiled landscapes, endless forests and glittering lakes, the couple moved to Lake Racken in the Värmland province the same year. Gradually, the couple's artist friends also settled at Lake Racken, which led to the founding of the Racken Group artists' colony. The Swedish artist received his first public recognition for his landscape paintings at an exhibition in Stockholm in 1898. In 1908 he presented his first solo exhibition. The snow-covered landscapes of Värmland with its frost-covered fields, lakes and streams soon became Fjæstad’s signature theme. The artist developed an unusual technique in which he coated his canvases with light-sensitive chemicals, projected photographs onto them and used them as a guide for his paintings. Many of his works can be admired in the Swedish National Museum, the Toledo Museum of Art in Ohio and the Musée d'Orsay in Paris. On 17 July 1948, Gustaf Fjæstad died in Arvika.