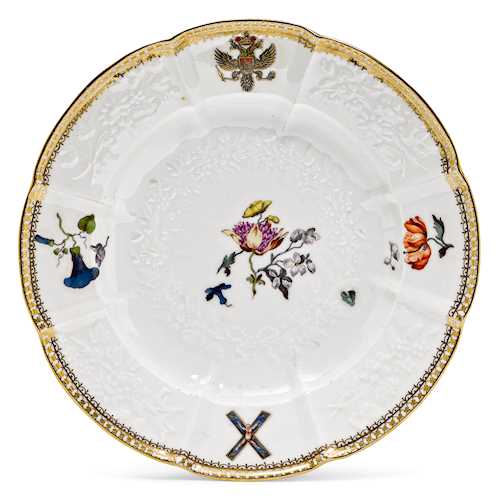 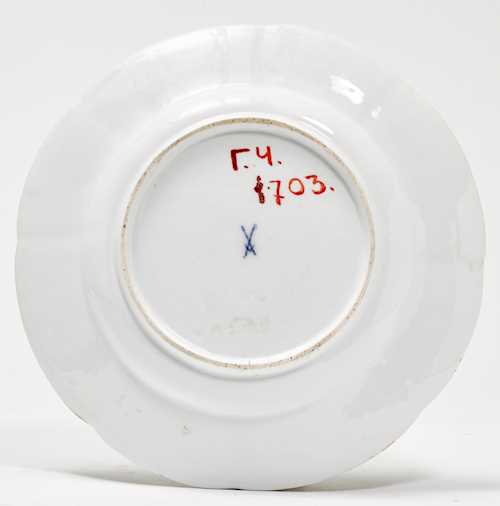 PLATE FROM THE "ST. ANDREW'S SERVICE" FOR TSARINA ELISABETH I OF RUSSIA

Meissen, ca. 1744-45. Design by Johann Friedrich Eberlein.
Featuring the so-called "Gotzkowsky" relief decoration, with the Russian double-headed eagle, St. Andrew's cross and flowers. Underglaze blue sword mark. Modeler's number 16. Inventory No. 1703 of the Hermitage, in red.
D 24 cm.
Provenance:
- Present to Tsarina Elisabeth I of Russia, from Friedrich August II, Elector of Saxony.
- In the sanctum of Tsarina Elisabeth, from July until November 1745.
- In the Winter Palace, in the sanctum of the Imperial Chamberlain, from the end of 1745 onwards.
- St. Petersburg, State Hermitage Museum, since 1911, archived under Inventory No. 1703.

From a large order for Tsarina Elisabeth Petrovna of Russia. With the Imperial double-headed eagle and the St. Andrew's Cross, the highest order of the Russian Tsarist Empire. It was the most extensive diplomatic gift the Manufactory had ever made.

With numerous reproductions of the service from Saxony and Russia, the Hermitage houses 170 plates of the service, only 34 originate from the original service (U. Pietsch (ed.), Meissen für die Zaren, Munich, 2004, p. 66).

Sold for CHF 5 250 (including buyer’s premium)
All information is subject to change.