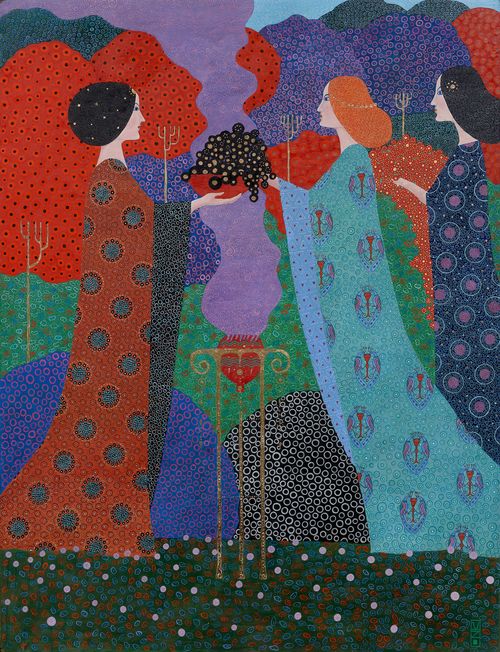 Vittorio Zecchin was born in 1878 in Murano; his father worked in a glass factory. Although he spent his childhood and youth in Murano surrounded by the glassworks, he had no interest in the art of glass and instead studied painting at the Accademia di Belle Arti in Venice. However, already at the age of 23 he gave up his ambitions, as, in his opinion, he could not get on with the uninspired style of teaching there, and also did not believe that anyone would listen to his ideas. So, in 1901 he left the Academy and worked for some years as a civil servant, until in 1908, he was so greatly moved by a new artistic movement, that he then joined it. This was a group of artists who were strongly influenced by Klimt and the whole movement of the Viennese Secession. Their work was on display between 1908 and 1920 at the Museum of Modern Art in Ca‘ Pesaro in Venice.
Fascinated by the mystical and symbolist painting of the time, as well as the Art Nouveau movement, he travelled to Vienna around 1910, in order to get to know the artists and their work in situ. There he met Gustav Klimt, who was to have a lasting influence on his creative work.

His high point as a painter came in 1914, when he completed "Le Mille e una Notte", a 30 meter-long wall painting, comprising 12 individual works depicting the procession of Aladdin and his entourage, as he goes to ask the Sultan for his daughter’s hand. The work was commissioned by the Hotel Terminus in Venice, which intended the painting for the dining room.
The present work has been bought by the antiquarian Giacomo Capellin, and it has been hanged in his showroom in the renaissance palazzo Da Mula in Murano (see the photograph).
The Museum in C’a Pesaro Palace in Venice today owns 6 of the 12 paintings, so that the 6 remaining works, of which one is offered here at auction, remain in private hands.