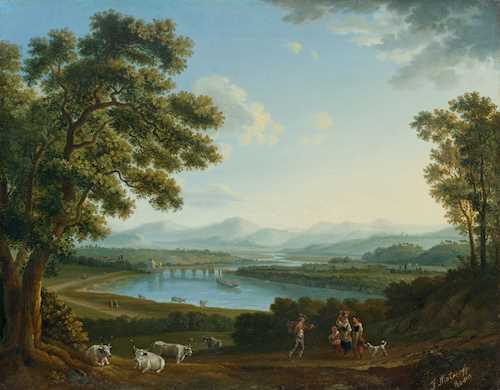 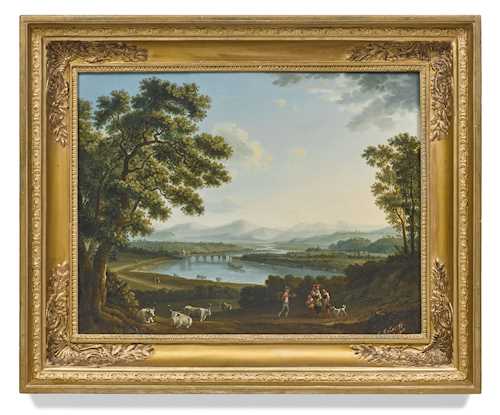 The painting offered here is a significant addition to the early work of the Russian landscape painter Fedor Mikhailovich Matveev and demonstrates his intensive artistic exchange with Jakob Philipp Hackert (1737–1807), who was working in Italy at the same time. Matveev studied at the Academy of Arts in St. Petersburg, where he graduated with the highest award of a gold medal. With a grant from the Academy, he then travelled to Rome, arriving in 1770. After the end of the fellowship, he decided to stay in Italy, undertaking numerous trips including Naples (1781), Sicily (1788), France and Switzerland.

In her expertise, Dr. Nordhoff writes: "Matveev sent several of his paintings to Russia, such as a veduta of Naples, for which he was awarded member status in the St. Petersburg Academy of Arts in 1807. His landscapes were also popular among the Russian court: more than ten paintings gifted by the artist to Tsarina Elizabeth Alexeievna (wife of Alexander I) remained in the Winter Palace until 1897 and were then transferred to the Russian Museum founded by Alexander III (now the State Russian Museum), where they are still held today. Matveev was also appreciated in Rome as a landscape painter. In 1813 he was appointed as a member of the local painters’ academy, San Luca. The reasons the artist remained in Italy for nearly fifty years without ever returning to Russia are unknown. Nevertheless, from 1819 he received a regular salary of 500 talers from the St. Petersburg Ministry of "Spiritual Affairs and Education”, which may indicate that he was also active in non-artistic matters for Russia”. The majority of his works are located today in public collections, such as the "View of Tivoli" in the Tretyakov Gallery in Moscow.

Matveev's career in Rome is partly owed to his acquaintance with the influential tourist guide Johann Friedrich Reiffenstein (1719–1793). Reiffenstein, who held the title of privy counsellor in Russia and in Saxe-Gotha, was appointed in 1788 as the art agent of Tsarina Catherine II in Rome and was responsible for acquiring works of art from the Eternal City for the court of the Tsars. Reiffenstein was a close friend of Jakob Philipp Hackert, to whom he had given a large commission from Catherine II at the beginning of his career. In addition, Reiffenstein was responsible for reporting on the progress of the young painters sent to Rome from Russia, including Matveev. As Reiffenstein stated in a letter, "The former [Matveev] turned first to the famous landscape painter, Monsieur Hackert, who gave him his drawings and paintings for copying so that he could adapt to a more correct drafting style and clearer and more accurate colour in painting, [as] I realised that he needed to make progress the most in these two points” (quoted from a copy of the original letter in Moscow, Russian State Archive of Ancient Acts). In a report to St. Petersburg on 3rd August 1782, Matveev himself mentioned the contacts he had made with painters, including Hackert.

Tracing back to a composition by Hackert, who had arrived in the Eternal City by 1768, the present painting underscores the collegial relationship between the two painters. The rendering of the figures and the animals, as well as the detailed handling of the foliage of the trees, distinctly reveal the ways in which Matveev engaged with the work of Hackert. The depicted view is from the vicinity of the Villa Madama, showing the course of the Tiber north of Rome, with the Monti Sabini recognisable in the background. In the middle ground, the bridge over the river is presumably the Roman "Pons Mulvius" or "Ponte Milvio” bridge, popularly known as "Ponte Molle", dating back to 109 BC.

It is therefore also not surprising that this landscape was long understood to be a work by Jakob Philipp Hackert and was likewise published as such by Dr. Claudia Nordhoff. A recent meticulous cleaning has revealed the signature of Matveev that had been previously concealed, perhaps in an effort to present the work as that of Hackert. After a thorough examination, Dr. Nordhoff has identified the painting as a characteristic work by the Russian artist Fedor Mikhailovich Matveev, dating it circa 1780, during the period of Matveev's early days in Rome.

This recent finding once again demonstrates the artistic bond between these two artists and clearly reveals the artistic virtuosity of Matveev.

Dr. Claudia Nordhoff plans to publish this painting in an article.