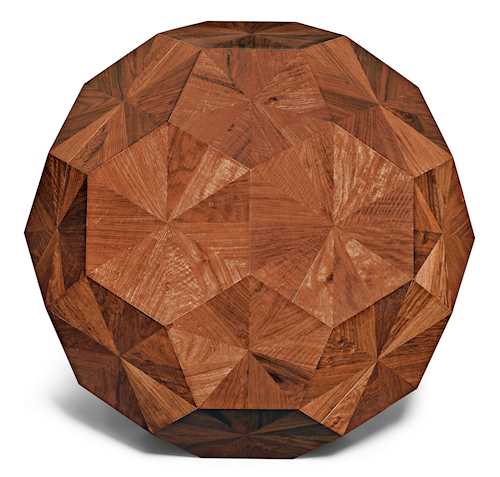 (Beijing 1957 - lives and works in Berlin)
Untitled (wooden ball). 2010.
Huali wood.
Diameter 65 cm.
Provenance:
- Galerie Urs Meile, Luzern.
- Purchased in 2012 from the above by the present owner, since then private collection Switzerland.

Ai Weiwei‘s “Wooden Ball” belongs to the “Divina Proportione” series, which consists of different sized wooden balls of different geometric forms, which are also made from different types of wood. These spheres relate back to the 1509 book “De divina proportione” by Luca Pacioli, which is supplied with illustrations including a geometric polyhedron by Leonardo da Vinci. The search for the perfect geometric form goes back to antiquity. However, Ai Weiwei draws on tradition not only with the form, but also with the execution of the work, which is based on traditional Chinese craftmanship, in which no nails, screws, glue or other aids are used, but consists of interlocking parts.

Ai Weiwei came up with the idea of the closed “Wooden Balls“ thanks to his cat’s plastic toy. He wanted to create a perfect piece of craftsmanship from an everyday contemporary toy, which would then be transformed into the artwork “Wooden Ball”. He spent 2 years looking for a perfect form, and for an equally perfect way of translating this, using traditional Chinese craftsmanship. Each sphere consists of 32 sides, and combines 12 pentagons and 20 hexagons, and although it may seem simple, it takes approximately a year to produce a sphere.

In the exhibition “Real Life Stories” at the Art of Museum of Bergen in 2012, Ai Weiwei presented an installation with 81 “Wooden Balls”, which represented the number of days of his imprisonment in 2011. So, as an artist who is critical of the regime, there is more behind these harmonious and perfect works. The curator Cui Cancan explained these works as follows: “The transformation of the Wooden Ball is a metaphoric representation of the historical changes we experience in our society. It is also consistent with Ai Weiwei’s interest: ´Where does our knowledge come from? What is the relationship between our beliefs, right and wrong, truth and false? How should we perceive a concept when it has experienced changes and produced something new? For me, these questions are meaningful as they depict the emergence of disappearance of aesthetics possibility, as well as the judgements of the possibility and transformation of ideology (if our ideology is really possible to transform). I have interest in these issues, namely, the possibility of a change in an original concept.”

Ai Weiwei is one of the most important and influential conceptual artists.