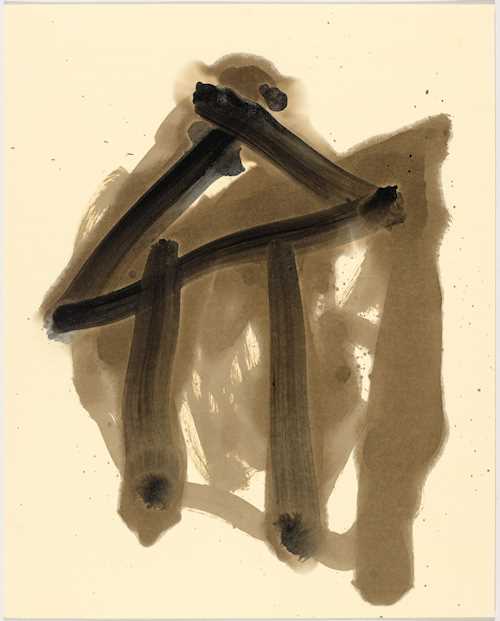 (Aberdeen/Washington 1915–1991 Provincetown/Massachusetts)
Drunk with Turpentine # 48. 1979.
Oil on cardboard.
Monogrammed and dated upper right (faded): RM 79.
51 × 40.5 cm.
This work will be included in the online supplement to the Robert Motherwell catalogue raisonné. We thank the Deadalus Foundation for their kind support.

The American artist Robert Motherwell was an Abstract Expressionist. He was born on 24 January 1915 in Aberdeen, Washington. From 1932 to 1938 he studied painting at the California School of Fine Arts and received his BA in philosophy at Stanford University. At Harvard he devoted himself to philosophy and French literature, which then took him to Paris in 1938/1939. There he made the acquaintance of artists such as Piet Mondrian and Fernand Léger and held his first exhibition at Galerie Duncan. Back in the United States, Motherwell began his studies in art history at Columbia University, New York, under Meyer Schapiro and Kurt Seligmann. His acquaintance with Roberto Matta and Wolfgang Paalen brought him closer to Surrealism, having got to know Paalen on a joint trip to Mexico. He had a growing number of exhibitions and, amongst other things, took part in the large-scale exhibition at MoMA “Fourteen Americans” in 1946. In 1945 Motherwell taught at the renowned Black Mountain College, and in 1951-1958 at Hunter College, New York. He undertook numerous trips through Europe. Robert Motherwell was married four times, including a marriage to Helen Frankenthaler. He died on 17 July 1991 in Provincetown, Massachusetts.

Like Jackson Pollock, to whom he is often referred as his intellectual counterpart, in his early work Motherwell was closely associated with Surrealism. In the 1950s, however, he turned towards Abstract Expressionism, and developed his own pictorial language, which is characterised by powerful black signs and gestural motifs. In the 1960s he turned increasingly towards colour field painting. Amongst other things, he cites pure presence, passion, immediacy, objectivity and clear colours as his ethical values. He often worked in large scale series, based on works of literature. He had full command of all the techniques he used.

In 1959 and 1964 Motherwell was one of the participants of documenta II and III in Kassel. In 1965 the Museum of Modern Art hosted its first comprehensive retrospective of his work. This was followed by numerous exhibitions in galleries and museums worldwide. The greatest honours were bestowed upon this American artist: the Guggenheim International Award in 1964; the Médaille de Vermeil of the city of Paris in 1977; in 1988 he was named Officer of the Ordre des Arts et des Lettres in France; in 1989 he was awarded the National Medal of Arts. In 1970 Robert Motherwell was made member of the American Academy of Arts and Letters, in 1985 member of the American Academy of Arts and Sciences and in 1990 Associate Member of the National Academy of Design.

The present work by Robert Motherwell belongs to the series "Drunk as Turpentine", which is based on a poem by the Chilean poet Pablo Neruda. The comprehensive series dates from the 1970s and is an outstanding example of Motherwell’s mature style. Reduced to black and white, he created gestural drawings with great spontaneity and energy. Only at second glance is the viewer aware that the artist not only experiments with the drawn lines, but also uses the intensity of the black to convey his aims and thereby creates depth and an extraordinary intensity.