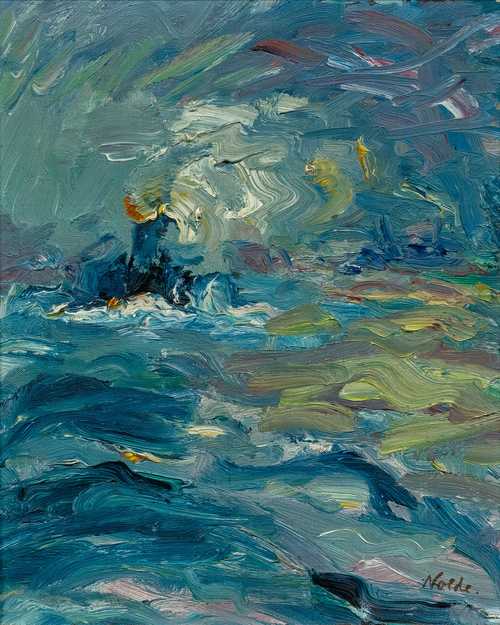 'Nolde understands the sea like no other painter before him. He sees it not from the beach or from a boat but as it exists in itself, devoid of any reference to man, eternally in motion, ever changing, living out its life in and for itself: a divine, self consuming, primal force that, in its untrammeled freedom, has existed unchanged since the very first day of creation...He has painted the sea in all its permutations, but above all in stormy agitation, its heavy swell transformed into white breakers as it retreats upon itself, beneath heavy, threatening clouds (…).' (Max Sauerlandt Emil Nolde, Munich, 1921, pp. 49-50.)

For Emil Nolde, who grew up in Schleswig, the sea was a permanent presence surrounding him and thus became one of the most important and most enduring themes in his art. As a single force of nature, the sea – deep, wide, roaring and hitting waves when it wants to bring all to their knees – is simultaneously a place of peace and quiet. Early on, the ocean began to captivate the artist and by the time he travelled in a small freighter on his way home from a journey, he was caught under the spell of the sea.

Emil Nolde spent the months of February and March of 1910 in Hamburg. There, Nolde was thrilled by the harbours, and within a short space of time, created 13 paintings, more than 100 ink drawings, 19 etchings and four woodcuts, all showing the harbour, the water and the incoming and outgoing steamers, tugs, cargo ships and sailing ships. Nolde’s time in Hamburg was dominated by work. He himself expressed it as a "submergence of the whole person in work and excitement". "I came into the work and nothing bothered me. With the pinnaces full of people, I sailed, working; by the bustle on the loading bridges, I sat, always working (...) ". (From Emil Nolde, Jahre der Kämpfe 1902-1914, 6 ed., Cologne 1991, p. 110) Inspired by the hardness of the harbour, the surrounding buildings, the docks, the shipyard and the life on the sea, Nolde tried to collect his impressions in various forms. Thanks to the ferry service, it was possible for the artist to get to all areas of the port to capture different views and impressions on paper. Even while the transport ship was moving, his brush and pen were always on the paper. The numerous sketches and ink drawings testify to the intensity of his examination of the subject. In addition to his general enthusiasm for the vehicles of water, he was particularly fascinated by the motif of the steamer. Many etchings and ink drawings from that time show the steamer in different variations. Even later, when he returned to Berlin and looked back on Hamburg as a source of inspiration for his further career, the motif of the steamer continued to follow the artist and he made new etchings of it. This preference was also emphasised in various oil paintings.

The present work "Der kleine Dampfer" is one of the 13 paintings Nolde produced during his time in Hamburg. It is a fine example of Nolde’s depiction of the wild sea and his ability to create, through his painting, a certain stormy mood that was typical for him. He does justice to his favourite subject of the steamer. Horizontally, the vehicle is introduced into the picture. Through the rising white steam clouds, the dynamic of the boat becomes visible and the viewer is prepared to follow the progressing ship over the waves with his eyes. Despite the same colour palette for the sea, the sky and the steamer, Nolde successfully separates the fields by changing the stroke of the brush. Like the other paintings he created in 1910, the present work, with its expressive brushwork, is characterized by an extraordinary painterly freedom that the artist must have experienced in Hamburg. Likewise worth noting is the format chosen by Nolde for this painting. Only few landscape paintings by the artist are depicted in portrait format, which further underscores the uniqueness of "Der kleine Dampfer".