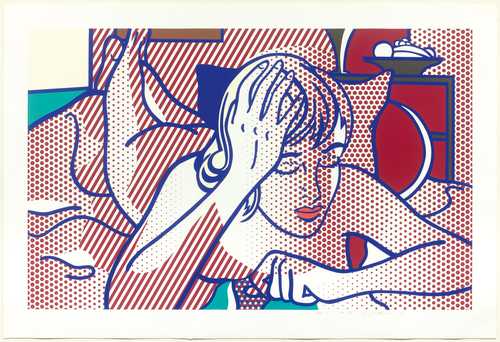 Roy Lichtenstein, along with Andy Warhol, is the most influential and dazzling personality within Pop Art. Most particularly in graphic art, both artists been immortalised with outstanding works which are recognisable to everyone. The six-part series “Nudes” from 1994, from which we are offering a State 1 “Thinking Nude”, is one of these exceptional works.
In the series, two fundamental differences between the two icons of Pop Art are revealed. Unlike Warhol, Lichtenstein rarely works in series. When he does, however, there is almost exclusively a thematic connection between the works, although he never serialises the works, as did his colleague.

In this last large series, Lichtenstein draws on his knowledge, experience and experiments in printing from the past 40 years, and yet still demonstrates his great enthusiasm for innovation.

He creates reminiscences of pre-existing series such as “Interiors” or individual works. As ever, he uses comics as templates but not as models: here he refers back to the comics “Love” and “Girl”. His prints are based on his own collages and are the departure point for later interpretations in oil.
For the first time certainly, in at least half of his motifs of the series, Lichtenstein works in a different printing state – State 1. Here the contours are blue and the dots and stripes are red. In this way, using exactly the same motif, he produces an entirely new effect and atmosphere. Through the dominance of the red, the works in State 1 have a warmer and less severe effect, which is also supported by the less pronounced contrast with the blue contours.
As before, he skilfully combines dots and stripes in his composition, and employs dots of different sizes, as for example in the works from the series “Reflections”, in order to create a three-dimensional effect. In the “Nudes” however, he allows the dots to range over the established contours, thereby creating a play of light and shade, which has not appeared in his work before.

Strikingly, the “Thinking Nude” reclines on the bed facing the viewer, but is fully absorbed in herself. The extreme close-up of the woman shifts the interest of the viewer uniquely towards her and inevitably we wonder what keeps her so deep in thought.