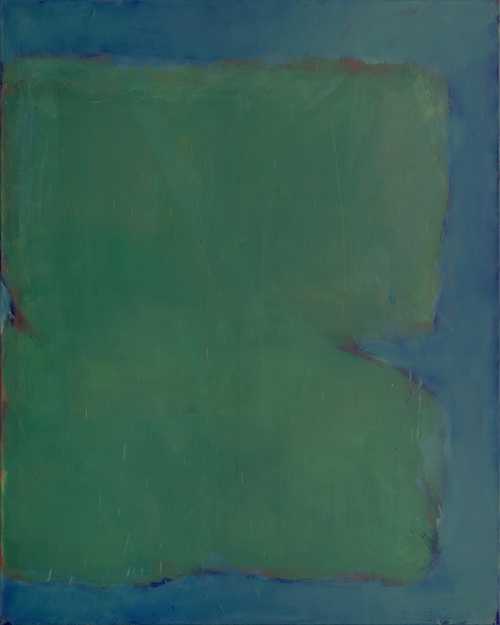 (Bern 1934 - lives and works in Saint Romain/Burgundy)
Untitled. 1962.
Oil on canvas.
Monogrammed and dated on the reverse: R.I. 62, also with directional arrows on the stretcher.
150 x 120 cm.
Provenance:
- M. Knoedler Zurich (verso with the label).
- Galerie Turske & Turske, Zurich (verso with the label).
- Purchased from the above by the present owner, since then private collection Rhineland.

Rolf Iseli was born in 1934 in Bern, where he attended the School of Applied Arts from 1950 to 1954 and was trained as a lithographer. In 1955 he was awarded a scholarship for a one-year stay in Paris. There he made the acquaintance of Sam Francis amongst others. Back in Switzerland, Galerie 33 in Bern hosted his first exhibitions.

Until 1966 he focussed on painting and was committed to Informel art. This work from 1962 is a wonderful example of this phase. As a counterpoint to the geometric abstraction of artists such as Serge Poliakoff, in Informel art the gestural element comes to the foreground. A green irregular area floats before a blue background, while the background also shimmers through the green and the forms are somehow elevated.

After 1966 Iseli turned away from oil painting and thereafter only made collages, works on paper and prints. Three of his works on paper with collage are also being offered at this auction (Lot 3426-3428). The dramatic shift in his oeuvre is impressive. The three-dimensional becomes a feature and his materials and techniques become more concrete. Sand and earth become permanent components of his works and lend them a unique quality.

He now lives between Bern and his house in Saint-Romain.