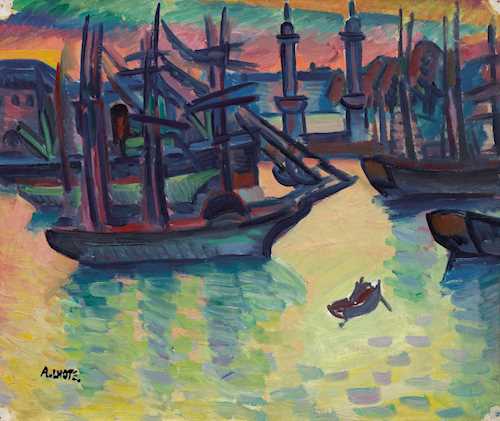 (Bordeaux 1885 – 1962 Paris)
Le Port de Bordeaux au soleil couchant. 1908.
Oil on canvas.
With the signature stamp lower left: A. LHOTE.
46.5 x 55 cm.
We would like to thank Dominique Bermann Martin for confirming the authenticity of the painting, August 2019. It is registred in the archive of Simon Lhote under number 551.

Employing dynamic brushstrokes and strong colours, André Lhote renders here the port of his birthplace, Bordeaux, a motif the artist frequently revisited throughout his life. Particularly among the best and most expensive works by the artist are the Cubist port views from the 1920s.

The present work was produced in 1908, at the tender age of only 23, and thus slightly earlier. One year prior, Lhote had visited the retrospective of Cézanne’s works, which immediately captivated him and fundamentally shaped his later practice. At the same time, the Fauvists in Paris, with their expressive colours also frequently depicting port views, were the talk of the town. Probably influenced by the trend at the time, the motif and colour choice of the present painting are reminiscent of the work of the Fauvists. One is able to sense, however, the enthusiasm of a young artist in search of his own style and already trying to incorporate the new impressions of Cézanne into his work, later culminating in Cubism.