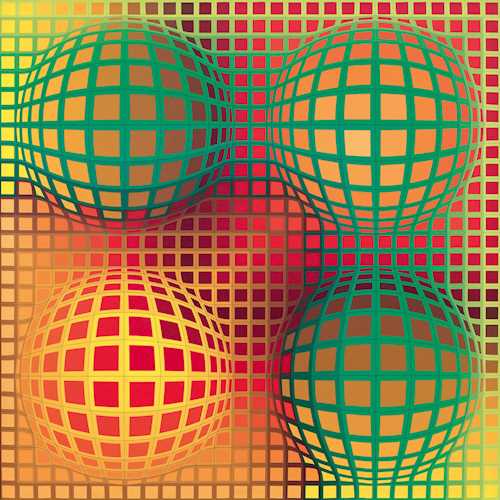 
Victor Vasarely, the inventor of Op Art in the 1960s, was a French painter of Hungarian descent. Born in Budapest in 1906, and educated at the Podolini-Volkmann Academy and then at the Mühely school of graphic art which was run by Sándor Bortnyik in the Bauhaus tradition, in 1930 he moved to Paris, where he initially made a living as a graphic artist. Through this he developed an interest in trompe-l’oeil, graphic patterning and spatial illusion. In 1944 he had his first exhibition at the Denise René Gallery in Paris. From then onwards he concentrated exclusively on his art, initially working with figurative, representational art, but which he soon abandoned in favour of purely geometric, abstract motifs.

From the end of the 1940s until the mid-1950s he temporarily banned all colour from his pictures and concentrated on the contrast of black and white, his “Noir-et-Blanc” period. “Wista” from 1949 (lot 3405) is an outstanding early example of the formal and mental rigor which later prevails in his work. The dominance of a central, black, angular form is held in check along its edges by the back and forth effect of the white. The echoes of the “Black Square” by Kasimir Malewitch and the Russian as well as German avant-garde of the 1910s and 1920s are clearly in evidence with this student of the Bauhaus. Vasarely’s geometric-abstract formal language thus drew on the forms of expression of Suprematism, the De Stijl movement and the Constructivists and became the universally recognised formal language which aimed to combine art and life. The concentration on black and white had already started with his early “Zebra” picture from 1937, and the reduction of colour is something to which he returned again and again in his otherwise colour-intensive oeuvre.

It is above all the colourful compositions of the Vega series that shape our view of Victor Vasarely. The present work with its contrasting green and orange, conjures up in paradigm fashion the vibrant atmosphere of the Swinging Sixties, ignited by the illusion of the four latticework spheres in movement, which crowd the space. As also lot 3493, with the illusion of a square three-dimension reached through a strong colour palette. The extremely fine application of paint and the barely visible brush strokes depersonalise Vasarely’s painting, constructing a bridge from fine to applied art, negating the idea of the artist as genius and challenging the viewer’s habitual ways of seeing. The visual extension of the pictorial space in Vasarely through the element of movement paves the way for the success story of Op-Art. The step from the surface into space, and the interaction with the viewer are central to this art, since the optical illusions with their unsettling spatial effects only occur in the human eye.

The continuing appreciation and significance of this artist is evident not least in the important retrospectives of the last two years, which renowned institutions have dedicated to his work: Labyrinth der Moderne 2018 at the Städel Museum, Frankfurt and 2019 Le Partage des Formes at the Centre Pompidou, Paris.