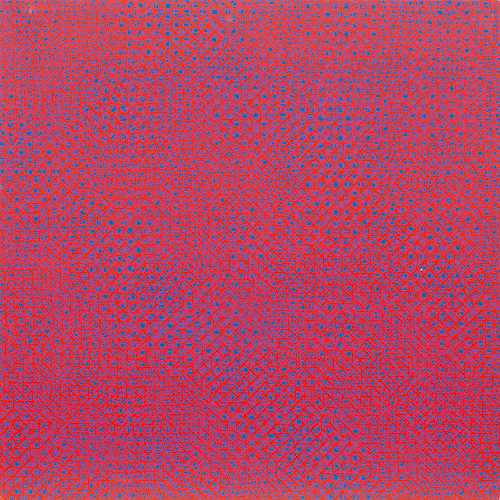 It has long been asserted that all the defining propositions of art in the 20th century were not only put forward, but also realised, in the early days of modernism, and that all that came afterwards were repetitions or, at best, variations. The observation, however, that deconstruction is, or can also be, construction, has deeply preoccupied and characterised the art of the second half of the 20th century. The artist François Morellet worked all his life to expand the definition of abstract art.

François Morellet played a central role in the development of abstract geometric art. His works use light, motors, sculptural and visual materials, and often involve the viewer. He was largely self-taught. He first encountered Concrete Art during his trip to Brazil in 1950. On his return to France, Morellet changed his stylistic approach to painting which became more geometric and analytical. From then on, he dealt exclusively with systems and geometric abstractions. In 1961, he founded the "Groupe de Recherche d'Art Visuel" (GRAV) with Joel Stein and fellow artists Julio Le Parc, Jean-Pierre Yvaral, Francisco Sobrino and Horacio Garcia Rossi.

His interest was primarily directed towards arranging the pictorial field in a regular and, above all, logical manner. His pictorial surfaces are mostly canvases, walls or entire rooms. These are intended to represent a section taken at random from the ordering principle that has been developed in each case. His paintings, for example, are often squares, which allow the viewer to think of the structure as continuing on all sides. It was important to the artist to depict the steady continuity of the structures and not to create an end.

The works offered here represent this wonderfully. The title "trames" can have several meanings when translated from the French: framework, foundation, background, grid, weft or pile from the vocabulary of textiles. It is as if large-format fabrics have been stretched and pulled open, and depicted very precisely, almost digitally.

The optical movements which the viewer experiences when looking at these paintings come from Morellet's emphasis on his need to introduce disorder into order. In his mature work, it became important for him to contrast the "absurd" with "logic", or to create an intentional disruption. He describes the inclusion of chance as a disruption of the regulated and predictable system. By introducing chance, the artist overlaps several "trames" at different angles. The titles indicate how many grids have been overlapped and the degree of each angle.