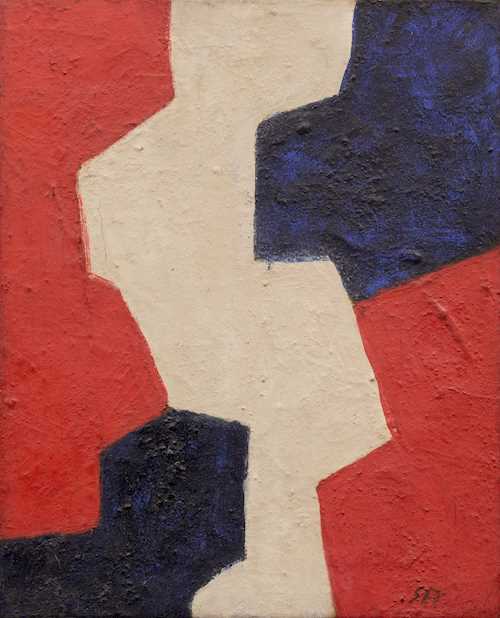 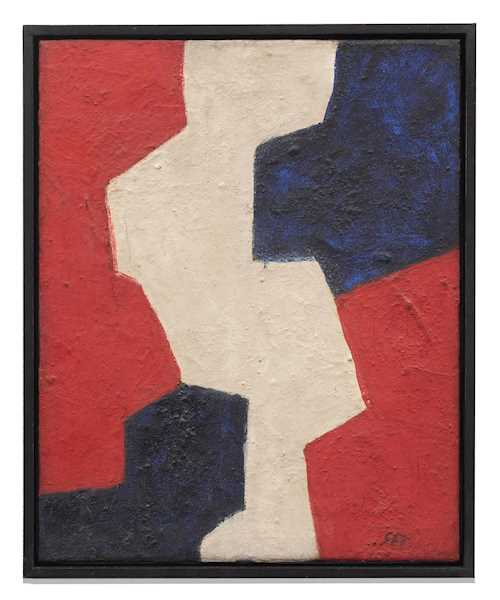 "How strange it is, both in life and in art: man looks far away, while, what he is looking for, is right next to him." Serge Poliakoff.

After an adventurous arrival in Paris, Moscow-born Serge Poliakoff began his studies in painting. From 1929 he was enrolled at the Académie Frochot and the Académie de la Grande Chaumière in Paris. In 1935 he went to London for two years and attended first the Chelsea School of Art, and then the Slade School of Art, before settling in Paris.

At first Serge Poliakoff would vary the academic traditions, preferring representational motifs - houses, trees, depictions of figures. Long after completing his studies at the Académie Frochot, he painted the present work on paper, "4 heures et quart", in 1940. Perhaps as a reminder of the intensive painting lessons he took at the Paris school. A colourful homage to his first years in France.

Serge Poliakoff's first abstract painting was created in 1938 and exhibited at the Paris gallery Le Niveau. From then on, abstraction became more and more prevalent, until the artist turned away from figurative painting altogether. By the end of the 1940s, Serge Poliakoff had found his unmistakable style:

Interlocking components combine to form an often intensely coloured structure. Blue, red, yellow, black, white, green - asymmetrical planes of luminous primary colours congregate close together and seem loosely and randomly, almost organically, drawn to one another. His compositions have the appearance of having been created without a strict preliminary design, yet Serge Poliakoff worked with a very clear, recognisable framework of basic lines and axes on which his canvases were structured. Extending from the corners or the middle of the lateral edges, the forms meet in the centre of the picture support. On these axes he loosely and intuitively placed the cell-like colour planes next to each other. Agile and energised, the dynamic forms in his paintings are carefully interlocked in the centre of the composition.

As in the work offered here, "Composition Abstraite", the white plane can be read as a stabilising element which lends the painting its central gravity. Stepping a little closer to the painting, a multitude of different tones can be discerned in the colours within a colour plane. The colour nuances overlap from deep dark blue to bright light blue. To achieve this, Poliakoff mixed pure pigments, which he prepared himself with a binding agent. To obtain a somewhat granular surface, he also mixed grains of sand into the colours. While in the 1940s the colour palette of his works was dominated by grey and brown tones, Poliakoff began to use brighter colours in the 1950s. In his mature late work there are also some almost monochrome compositions. As in the painting presented here from 1962, the artist succeeded in imparting a strong inner luminosity in his works, confronting the viewer with a clear compositional certainty, great artistic experience and mastery of the different pigments.