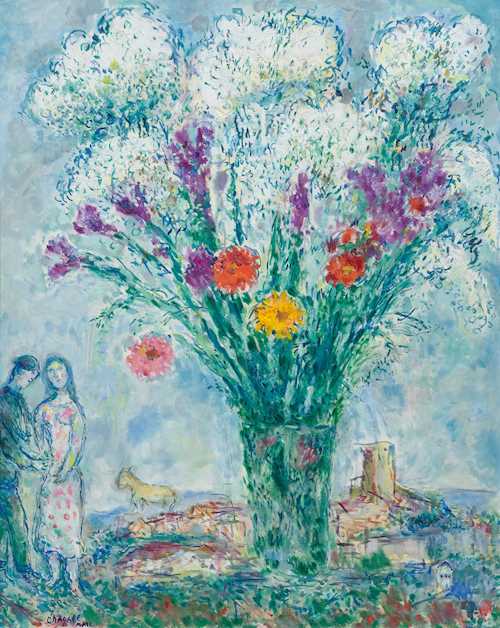 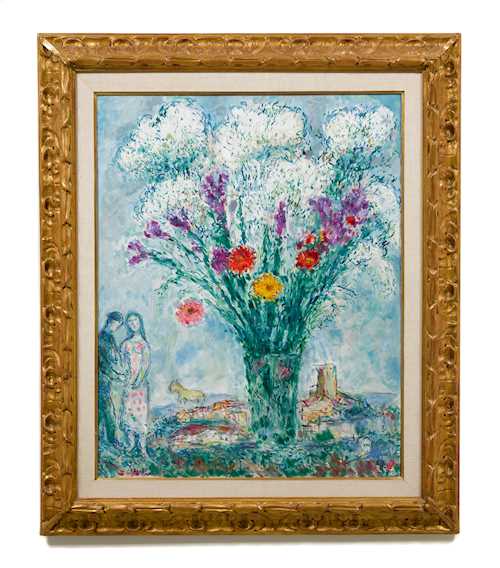 Provenance:
- Galerie Maeght, Paris (label on the reverse).
- Auction Koller, Zurich, 2 November 1979, lot 5074.
- Swiss private collection, acquired at the above auction and by descent to the present owners.

‘Bouquet d’été' was created in 1973. By then Chagall was already an internationally acclaimed artist and was considered one of the greatest living painters overall. Since the mid-1960s, Chagall had been living with his family in Saint-Paul-de-Vence, France, a quiet, idyllic village on a hill on the Cote d’Azur where the artist could reflect on his fulfilled life.

The present work demonstrates the mature style of a painter who never lost his artistic energy. Through new commissions and his work with a variety of media in the 1960s and 1970s, Chagall was filled with a new wave of creativity. In his painting he revived elements from his early work. As Chagall grew older, memory became a key element in his paintings. The theme of lovers and bouquets of flowers are subjects that Chagall had repeatedly taken up since the 1920s. This large work is dominated by a central flower bouquet that projects into the sky from a transparent vase. To the left of the vase are two lovers, as a symbol of everlasting love, with a goat next to them and the panorama of St. Paul-de-Vence on the hill in the background. Chagall has filled the canvas with energetic, wild brushstrokes, leaving the viewer without a hint of his advanced age. Chagall exercised some restraint in choosing the colours for “Bouquet d’été”, opting for the light, monochrome blue of the background in combination with the white flowers. However, Chagall’s typical colour accents are also not to be missed here, as he skilfully incorporated them into the bouquet as coloured flowers.