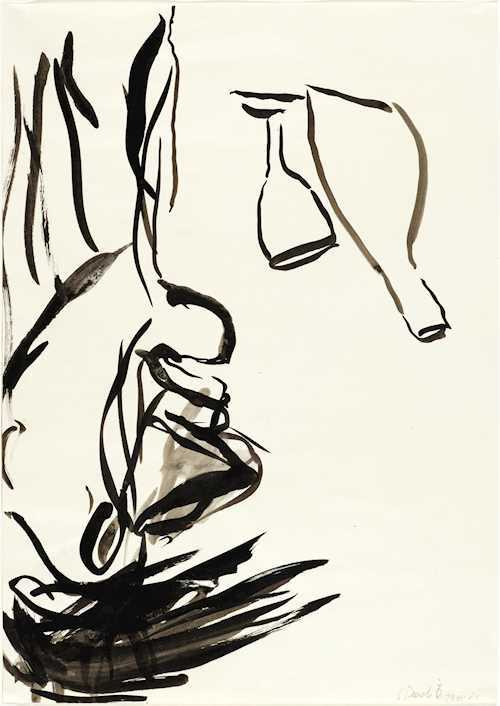 "The inversion of the motif in the painting gave me the freedom to deal with painterly problems." Georg Baselitz

In the early 1980s, Georg Baselitz's œuvre included two series, "Orangenesser" (Orange Eaters) and "Trinker" (Drinkers), in which he analysed and executed the motifs using a wide variety of painterly techniques. He skilfully employed these prosaic subjects - eating an orange or drinking from a bottle - to create lively colour relationships and a hatched gestural brushwork that deliberately flaunts their own lack of elegance or apparent sophistication.

The present ink drawing from 1981 is an outstanding example from his "Drinker" series. Pushed to the very left of the image, we see the drinker protruding into the picture, but we are neither at eye level with him, since he is standing on his head, nor can we look him in the eye, since he, as is also characteristic of Baselitz's portraits, being depicted in profile, does not communicate with the viewer at all, but looks past them into an imaginary space. In a few skilful brushstrokes, the artist conjures up before us a figure whose streamlined hair and dominant chin immediately catch the eye. The large nose, accentuated by lighter accents, also stands out, and the colloquial "drunkard's nose" is suggested. Unlike the detailed depiction of the figure, the bottle and glass are reduced to the most essential contours.

On the one hand, Georg Baselitz seeks to separate form and content through the stylistic device of inverted representation, thus evidently turning against the hitherto irrevocable conventions of painting. On the other hand, his motifs are intended to represent pictorial types and not to serve as illustrations. According to the artist's own interpretation, he has created a portrait with a still life. But even under this artistic premise, abstraction and the denial of narration prove almost impossible for the viewer. In the mind's eye, a story immediately unfolds around the figure - Who is this? Why is he drinking? Does he drink a lot? Where is he looking?