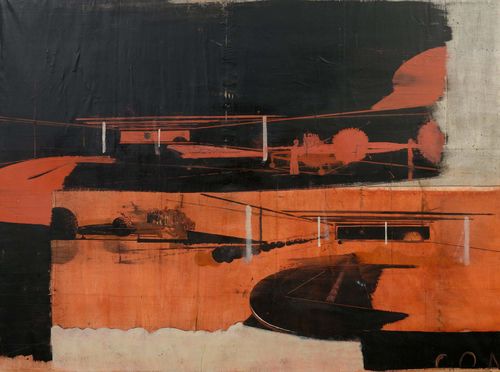 (Leipzig 1960–linves and works in Leipzig)
Zwei Klassen. 1995.
Oil on paper laid on canvas.
Signed and dated lower right: RAUCH 95.
145 x 208 cm.
Were it not the painter’s given name, "Neo Rauch" would be predestined for an artist’s signature. Virtually embodying the "new" generation and rating as the pioneer of the "New Leipzig School" are his forename’s agenda. In fact, "new" applies in more than one way to the work of this painter, born in Leipzig in 1960. At this juncture one might conduct a discussion of “new” as a comprehensive philosophical propaedeutic, but we cannot do so here. We can state only that we are acquainted with the principle that one may call "new" that which transforms the already existing and known to the yet unknown, we may apply the attribute here. Often dream worlds of overlapping spaces and times are represented with imagery influenced by social realism, as well as comics and pop art. However, classification makes sense with the least pioneering artists. Texts in articles and exhibition catalogues are easily read, but one has difficulty with the phenomenon itself; that which constitutes the art of Neo Rauch cannot be grasped within the traditional categories. Neo Rauch's work of the 90s differs from the works after the turn of the millennium. The recent works are stylistically excessive, more strongly committed to realism, sculptural, and painted with very opaque colours. The pictorial cosmos is compressed intensely; it has become more complex and more confusing. Previously the compositions were graphic and closer to the style of comics. We see here what is later condensed, in the imagery that is not so highly compressed, where the palette is even more limited but beautifully visible. One encounters strange and enigmatic landscapes; the context is not clear. Quite often, as in the present painting, there are architectonic landscapes that resemble building models. In "Two Classes" two different perspective points create a division between the upper and lower picture halves, which are further disengaged through the inversion of their colours: while the subject in the lower part is rendered in orange-on-black, in the upper part it is black-on-orange. This effect is similar to the transition from black-figure to red-figure vase painting in Greece. The composition also features some intentional "reflections". There are two different central perspective lines: one running in the upper area to a point in the left half of the picture, the other, in the lower area, to a point in the right half of the picture; and they are aligned primarily with the architectonic elements. In both buildings there appear to be large, white-painted supporting columns beneath flat roofs that lead to a wide, rectangular window area. What lies behind them represents the outside world and here each colour combination is rotated again, so that the orange-on-black and its reverse are preserved. On the other side of each building is a class to which a model resembling two planets is being explained. This creates a fourfold division of the painting. It seems that each model is the world represented in the window of the other class. Possibly Neo Rauch is presenting in this painting a thought experiment, which makes each class hold up their model to the reality of the other class. It is also possible that the appeal to a two-class society is not unintentional. As one can imagine, in a society that becomes sharply divided into classes, each speaks about the other, but they represent mutually "world-building" realities. In 2010 for Neo Rauch's 50th birthday comprehensive exhibitions were held simultaneously in Leipzig and Munich. At the very beginning of the foreword to the joint exhibition catalogue, Hans Werner Schmidt, Director of the Museum der Bildenden Künste Leipzig, and Klaus Schrenk, General Director of the Bayerische Staatsgemäldesammlungen, formulated two superlatives: "Neo Rauch, born in Leipzig in 1960, is undoubtedly the world’s most important and most discussed German painter of his generation."