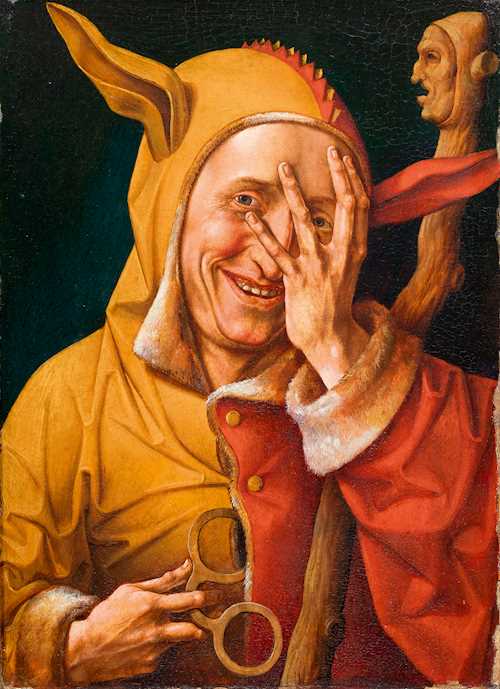 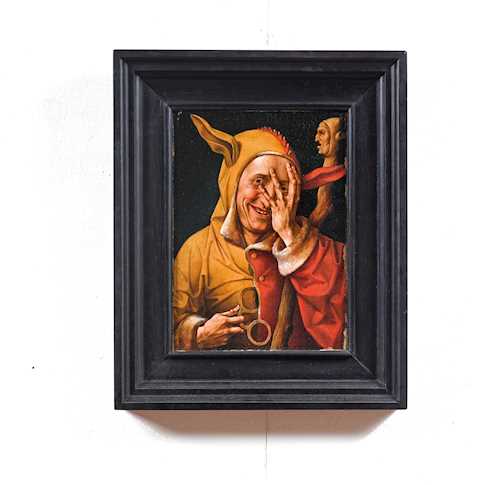 This work by the Master of 1537 was on loan from 2010 to the Musée départemental de Flandre in Cassel (inv. no. D.2010.5), and exhibited as an eye-catcher there. The Master, who worked in Mechelen between 1520 and 1570, was given this sobriquet on the basis of a panel attributed to him, representing the Holy Family and dated 1537 (see Vézilier 2010, fig. 52.4, p. 166). Dr. Jaco Rutgers concludes in his academic study (25 June 2019) that the Master of 1537 is identical to Frans Verbeeck. Stylistically, the Master is close to Jan Sanders van Hemessen (1500–1566) and Pieter Coeck van Aelst (1502–1550), but he developed a very personal style characterised by exaggerated facial features, extravagant poses and unique compositions, adding a satirical dimension to his compositions.

The figure of the jester or fool is found in 16th century Flemish painting, such as in works by Quentin Massys (1466–1530) and engravings by Lucas van Leyden (1494–1533). It is therefore not surprising that while in the Hintze Collection, our painting was considered to be by Massys. The work offered here, however, is a rarity in that the figure of the jester is depicted as a portrait against a black background, and the entire composition concentrates on his facial expression. The painting becomes particularly interesting when one knows that it depicts the Dutch proverb "door de vingers zien" (literally "to look at the world through one’s fingers" – to turn a blind eye), still in current use. In order to illustrate this proverb, both the hand gestures and the motif of the glasses play a central role: the jester, who has put his glasses in his coat, looks at the world through his fingers. This proverb reveals an attitude that consists of distancing oneself from everything that goes wrong in the world. By closing his eyes and remaining silent, the individual succeeds in protecting himself. The jester also calls on the viewer to behave just as favourably towards him. The conventional symbols of the jester can also be found in this representation: the yellow-red costume, the cap with the dog's ears, the cockscomb, the fool's staff on the right and the glasses in the foreground. The latter, usually a sign of scholarship, are here associated with glare and deception, because making glasses at the time was a technical challenge, causing their quality to vary greatly – for this reason, their makers were sometimes considered charlatans.

The painting has been dendrochronologically examined by Dr Peter Klein and may have been made as early as 1548.