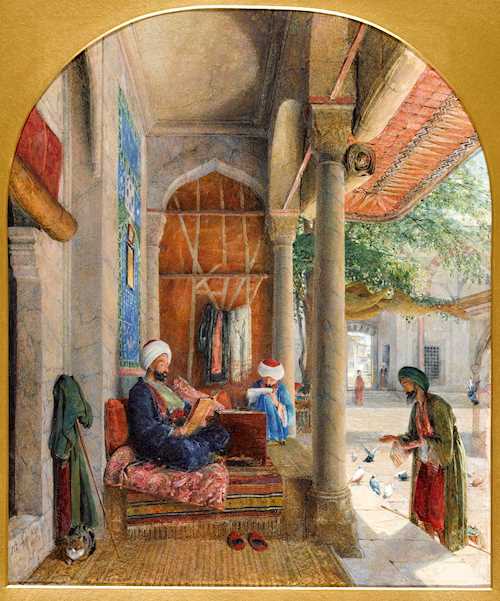 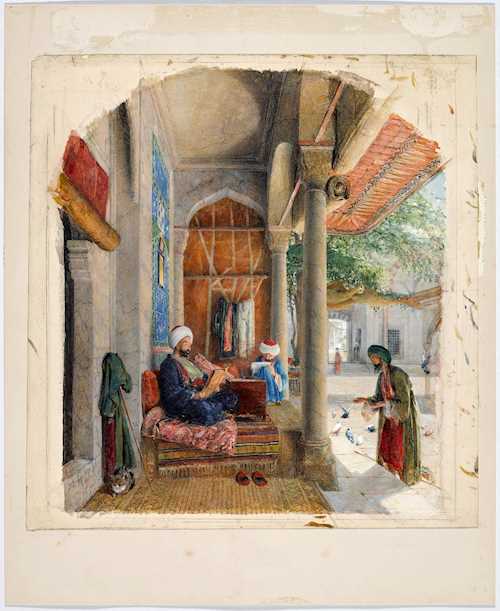 In 1864, the year after this watercolour was painted, Lewis was at the height of his career. His large painting, The Hosh (courtyard) of the house of the Coptic Patriarch, Cairo was hung in the ‘place of honour’ in the East Room of the Royal Academy (no.110). An influential critic praised it as ‘one of the most brilliant of his pictures …. The whole scene is full of life, colour and light (Athenaeum, 7 May 1864, p.651). For The Times, even though it was ‘somewhat bewildering by its multiplicity – 20 pictures, let us say, in one’, it was a ‘picture of marvellous detail… The sunlight filters through the acacia boughs, and checks the pavement, while half light, half shade, pigeons flutter and coo …. ’ (30 April, 1864, p.14).
Three smaller pictures exhibited that year were also noted by the critics. Among them was A fakeer at the door of a mosque - Constantinople (no.133), which, the Athenaeum observed, ‘shows a priest seated in the shade of a verandah, while begging of him, and out in the sun, stands a green-turbaned descendant of the Prophet. The picture is painted with greater breadth than is commonly the case with Mr. Lewis’ (1864, p.651). Clearly this is the scene depicted in the watercolour here, dated a year earlier. It is one of the duplicates that Lewis routinely made of the oil paintings he was intending to exhibit at the RA. Two men are shown facing one another, within the courtyard of a mosque. One is an arzuhalci (public letter-writer) seated in the portico of a small building with overhanging eaves - probably a türbe (tomb) - the open door of which, with rolled-up leather curtain (perde), is seen to the left; beside him is his writing box/desk, with pen and pen case (divit) on top. Outside in the courtyard is his supplicant, a fakir or poor man (despite his green turban, denoting his status as a hacı, or Mecca pilgrim) asking for alms, which seem not to be forthcoming, since the arzuhalci, a haughty expression on his face, does not look up from the open volume (probably a religious text) that absorbs his attention. Lewis reinforces the divide between them by placing one on a comfortable cushion in the cool of the portico and the other standing in the glare of the open courtyard. Around him are pigeons, fluttering in the air and pecking on the ground, and above, the green leaves of a large tree – both echoes of the larger Hosh, exhibited the same year. To the right can be seen the şadırvan for ablutions and in the background an open doorway reveals the space beyond, with another mosque or türbe. A subsidiary figure, also seated in the portico, is similarly absorbed in his writing. In the foreground is the somnolent, exquisitely characterised cat so often seen in Lewis’s paintings, particularly accompanying a figure who is writing or reading.
Western artists who depicted public letter writers in the East more often showed them writing letters dictated by women, highlighting their illiteracy at a time when European women of all classes were more widely literate. Lewis himself had made his own version of this popular subject, The Arab Scribe, Cairo (Orientalist Museum, Doha), in 1852, for one of his early exhibits at the Society of Painters in Water Colours, soon after he had returned to England after his eleven year sojourn in Turkey and Egypt. This had been a riposte or homage to Sir David Wilkie’s The Turkish letter-writer (1840, Aberdeen Art Gallery and Museums). It was typical of Lewis that ten years or so after his Arab Scribe he should choose a more unconventional and less romantic interpretation of the subject, but which, nevertheless, contains many of the hallmarks that had made his work so successful – saturated colour, diffused and bright light, interior and exterior spaces.
The oil version of this watercolour is currently untraced (not seen since shortly after it was exhibited) but clues regarding its size and purpose can be gleaned from another of Lewis’s smaller oil paintings at the RA in 1864, A startling account, Constantinople (no.78; Victoria and Albert Museum, London). This shows the interior of a Turkish house, with a wealthy Persian seated on a divan, remonstrating with his servants after being presented with unexpectedly high household bills (see Briony Llewellyn, ‘David Wilkie and John Frederick Lewis in Constantinople, 1840: an artistic dialogue', Burlington Magazine, September 2003, no.1206, vol CXLV, pp. 624-31). As in the Fakeer, a column divides the superior from the inferior, the seated from the standing individuals. The two are roughly mirror images, one a domestic interior, the other a religious exterior, and it seems likely that Lewis intended them as a pair, just as he was to do with later exhibits (An intercepted correspondence, Cairo and The Commentator on the Koran, in 1869, and Indoor Gossip, Cairo and Outdoor Gossip, Cairo in 1874). The watercolour duplicate of the Startling Account (formerly known as Disputing Accounts) also exists (Private Collection) and as this is a similar size to the watercolour of the Fakeer (34.2 x 28.7 cm and 31.1 x 26 cm) it is likely that the oil version of the latter was comparable in size to the oil version of A Startling Account (32.4 x 25.1 cm.)

Lewis’s reputation as a painter of ‘Oriental’ life had been built on the technical virtuosity of his watercolours, and, although market pressures had influenced his switch to oil for his exhibition pictures it became his practice to make two almost identical versions of his compositions in the two different media. The oils brought him status and recognition; the watercolours brought him further income through private sales to clients, often through the agency of his favoured dealer, William Vokins (see Briony Llewellyn, ‘Is He Repeating Himself? Creative, Aesthetic, and Commercial Dialogue in the Replicas of John Frederick Lewis’, in Julie F. Codell, ed., Victorian Artists’ Autograph Replicas Auras, Aesthetics, Patronage and the Art Market, New York and London: Routledge (Taylor & Francis Group), 2020, pp.195-210). Given Lewis’s expertise in the medium of watercolour, it is likely that the watercolour preceded the oil. In the case of A Fakeer and A Startling Account, the visual impact of the watercolour was probably as great as that of the similarly sized oil. Using dense, opaque colours, it seems that his intention was to invest his watercolours, the medium in which he was at his best, with the status of oil, the medium in which he had been obliged to paint to further his career and financial security.

The watercolour of A Fakeer was acquired by Myles Birket Foster (1825-1899), an artist also known for his highly-worked watercolours, possibly directly from Lewis, though this cannot yet be firmly established. It achieved one of the highest prices in the sale of Foster’s paintings and watercolours held in 1894 a few years before his death, in which artists such as Turner and Millais were represented, as well as important works by Frederick Walker and George Pinwell. By then Lewis’s watercolour had acquired a different title, The Mendicant, and was thought to represent the interior of a house, rather than a mosque. How this mistake occurred is not known, but over a century later the watercolour’s correct title is now restored and its intriguing subject can be better appreciated.

Briony Llewellyn and Charles Newton, with thanks to Nebahat Avcioğlu.

Our thanks to Briony Llewellyn and Charles Newton for confirming the authenticity of the work and for their catalogue text.