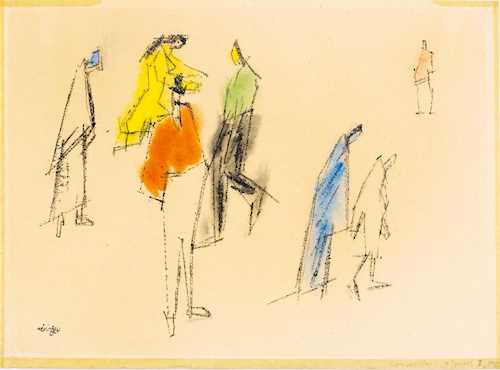 (1871 New York 1956)
Compositions: Figures I. 1945
Ink, watercolour and charcoal on paper.
Signed lower left: Feininger, as well as titled and dated lower right.
29 x 39.5 cm.
Achim Moeller, Managing Principal of The Lyonel Feininger Project LLC, New York - Berlin has confirmed the authenticity of this work, which is registred under no. 1628-10-10-19.

In 1937 Feininger and his second wife moved to New York, the city where he had lived until he was 16 years old. Despite popularity in Europe, the name Feininger was largely unknown in America, which was difficult for the artist to handle at first. He eventually tried to warm up to the new city and increasingly dealt with the buildings of the New York metropolis. He created his first paintings and etchings of Manhattan and its skyscrapers.

During this time, he also created many compositions, in which figures play a central role. They show independent walking figures. In 1946 an exhibition in New York showing such works from 1945 was entitled "Figures by Fininger”.