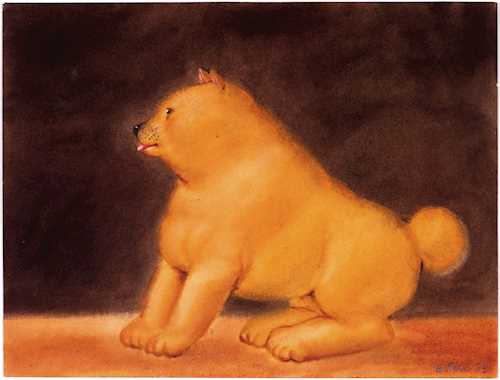 After his fine art studies in Bogota and first successful exhibitions, in 1952 the 20-year-old Fernando Botero decided to travel to Europe, in order to continue his studies in more depth. His first stop was in Madrid where the Prado afforded him an incomparable insight into European art history. The following year he made use of the Louvre in Paris, in order to strengthen his knowledge of the European art tradition. Finally, it was in Florence that the Old Masters aroused his interest and drew the young artist more to museums and art collections than to the academy.

Through this intensive examination of European art, it became clear that Botero, as a Latin American with his exposure to a different social and cultural context, would ask entirely different questions of art. Beyond the visible, he wanted to understand the historical context in which the works had been produced, how and why, from what need, and what their function had been.

By the end of his stay in Europe, some aspects had emerged, which became the underlying principle of his oeuvre: it is not the motif, which is the defining moment in a painting, but the inner structure, that is the perfect relationship between form and colour. Despite all these influences, Botero went his own way and found his own pictorial language, which is rooted in his identity and culture.

After a short stay in Columbia and Mexico, in 1960 he moved to New York, where, with his voluminous, poetic and in a way folkloric pictures, he encountered on the one hand the art of the Abstract Expressionists, whose gestural painting he admired, and on the other hand the emerging Pop Art with its critique of consumerism. The initial lack of understanding and harsh criticism of the folkloric, backward-looking art, gave way in time to a recognition of his unique artistic style, his consistent pictorial and compositional development, his unique painterly quality and his unmistakable cultural identity.

Depictions of animals play a big role in the oeuvre of Fernando Botero, be it his portraits of rulers, the circus or bull fights. Time and again horses, dogs, cats and bulls are the companions or opponents of humans. Apart from his sculptural work, however, in his paintings and drawings animals rarely appear as the sole motif, as is the case with the present pastel drawing. The dog sits in profile with his tongue hanging out towards the viewer. The warm colours of the pastel, the friendly panting dog with his fluffy tail shows clearly the artist’s affinity to animals. We might almost describe this wonderful work of a dog as a classic portrait, and yet we are aware of the irony, which Botero plays with in many of his works.

Despite the voluminous form of the dog, which is typical of Botero, the body is tensed, as though it would jump up and run away at any moment. This work powerfully demonstrates that the artist is not concerned with depicting fat bodies, be it humans or animals, or other objects, but with “converting reality into art by means of transformation or deformation” (quote. Hanstein, Mariana: Fernando Botero, Cologne 2003, p. 49). In the art of deformation, Botero, so thoroughly imbued with art, stands in a long tradition including for example Giotto, Raphael, El Greco and Alberto Giacometti.