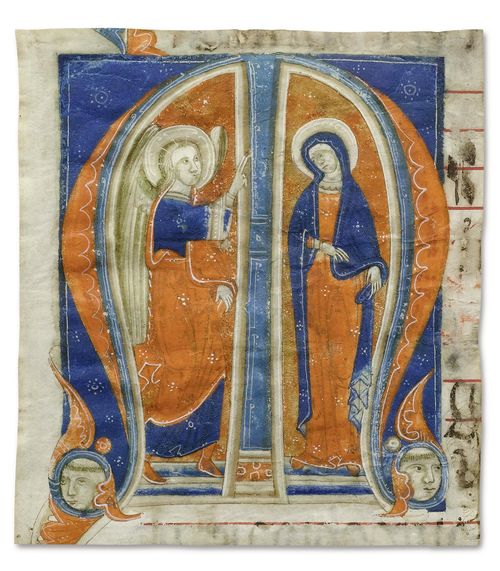 initial M with the Annunciation Vellum 122 x 110 mm. The present fragment with the initial M and a depiction of the Annunciation comes from a now dismantled liturgical book. The present initial together with its sister piece are presumably the remains of a liturgical book made for the diocese of Imola. The somewhat archaic formulas employed by the illuminator point to the refinements of the Master of the Gradual of the Cathedral of Imola, so that we might postulate a date of around 1260-65. 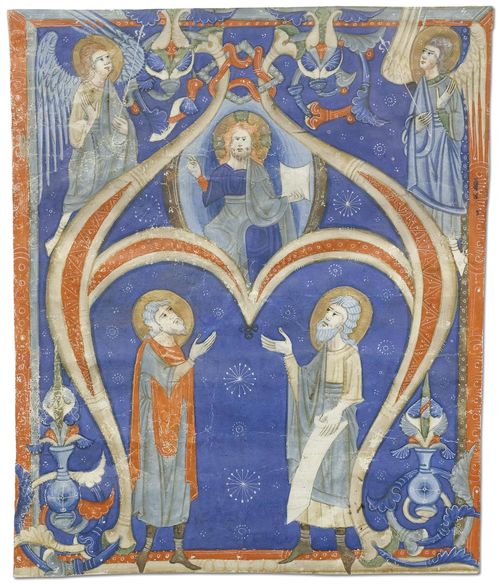 Initial A from a gradual with Christ in conversation with two prophets. Vellum. Emilia, ca. 1265-1270. 181 x 150 mm. Provenance: - Imola, Cathedral(?). - Geneva, William Kündig. - London, Christies June 1992. - thence to the current collection. Bibliography: - Friedrich G. Zeileis, Più ridon le carte (3.ed.), Rauris 2014, pp. 36-37 and 308-309. Literature cited: - Fabrizio Lollini, in: Franco Faranda (ed.), Cor unum et anima una. Corali Miniati della Chiesa di Imola, Faenza 1994, pp. 178-180. - Ada Labriola, in: Miklòs Boskovits (ed.), Miniature a Brera 1100-1422, Milan 1997, pp. 104-107. - Silvia Battistini, in: Fabrizio Lollini (ed.), Corali miniati di Faenza, Bagnacavallo e Cotignola. Tesori dalla Diocesi, Faenza 2000, pp. 169-170. This splendid and imposing initial A from a gradual, shows a depiction of the Almighty conversing with David and another prophet. No doubt this was the very same hand as that of the three large historiated initials of the Gradual of the Cathedral of Imola (Imola, Museo Diocesano, ms. corale III, fols. 51r,78r, 89v) This Master is an important artist and must have played a leading role in the early book illumination of Emilia Romagna. For this reason I have baptised this most notable illuminator Master of the Gradual of the Cathedral of Imola, after the said gradual. By way of clarification, this artist is not identical with the equally talented protagonist known as the "Master of Imola" - he of the illumination of an antiphonary series for San Domenico in Imola, barely a decade later. In view of the fact that the Cathedral of Imola was consecrated in 1271, we can assume that the first series of liturgical books was illuminated around this date, which makes the date of circa 1265-70 most probable. A further two initials by this master are to be found in the Metropolitan Museum in New York.

Bas-de-page with Michael weighing two souls while a Dominican nun intercedes. Vellum. Tuscany, ca. 1265-1270. 100 x 253 mm. Provenance: - 1975, Paris, Berès. - 1992, New York, Breslau collection. - 1993, London Sotheby's 6 December 1993, Lot No. 23, purchased by the current owner. Bibliography: - Friedrich G. Zeileis, Più ridon le carte (3.ed.), Rauris 2014, p. 52. This charming early Bas-de-Page comes from a liturgical book made for the Dominican nuns and shows a horizontal, gnarled, scrolled tendril, with a green bird entwined, and the figure of the archangel Michael in the centre. It possible that this leaf was produced by a somewhat older precursor of Maestro Geometrico around 1265-70. 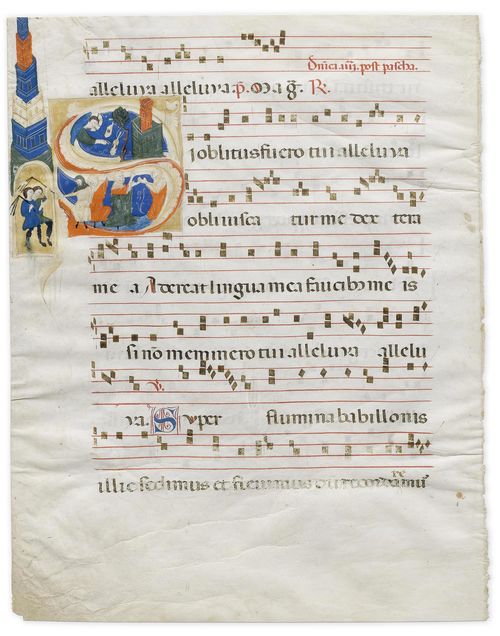 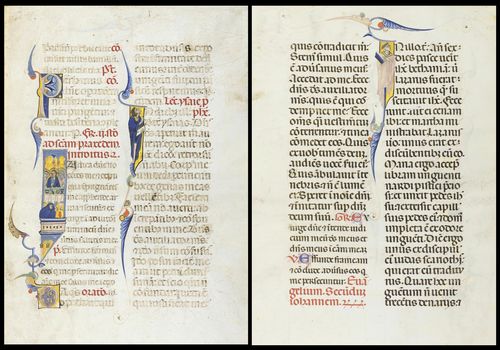 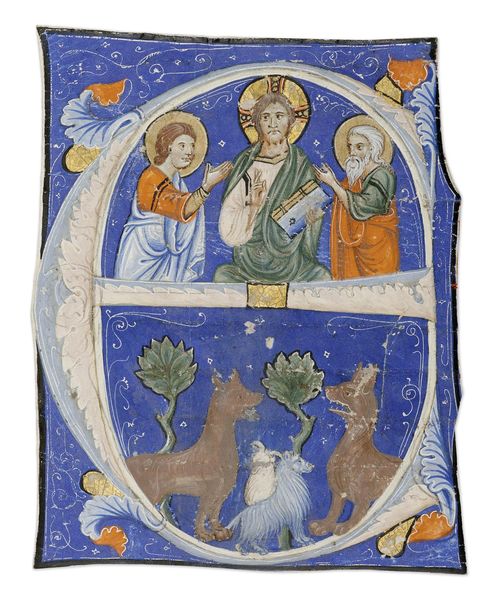 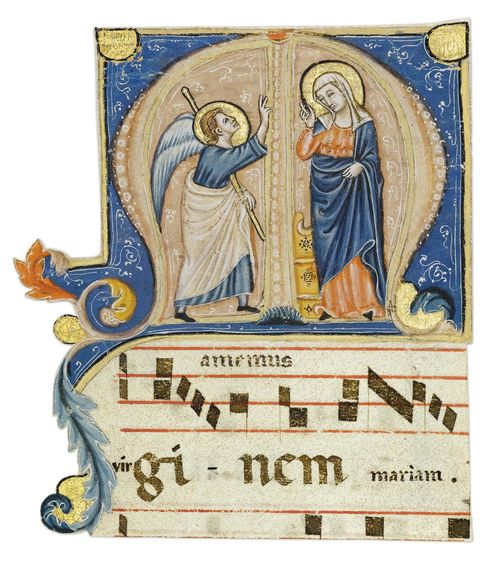 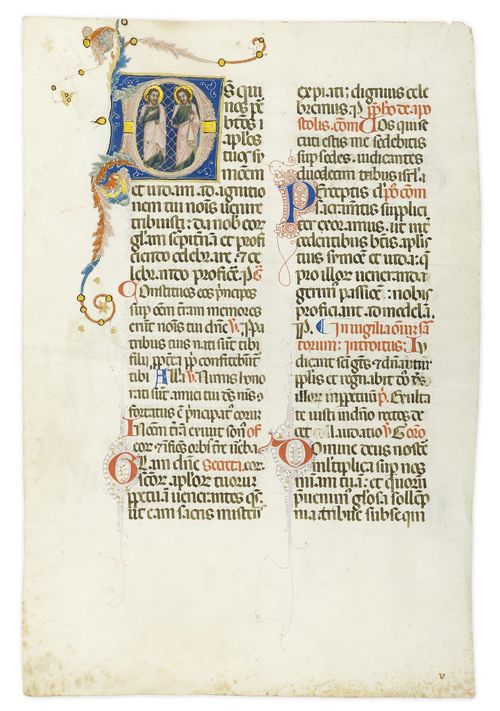 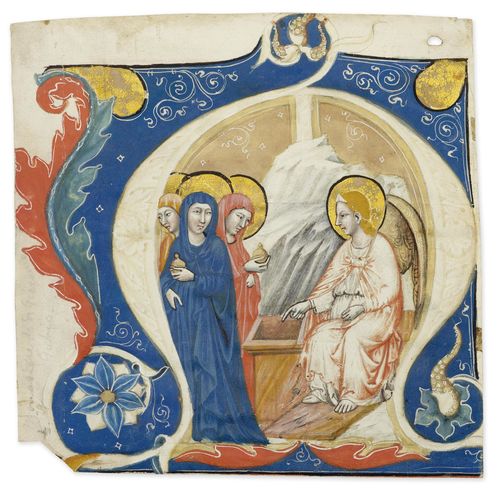 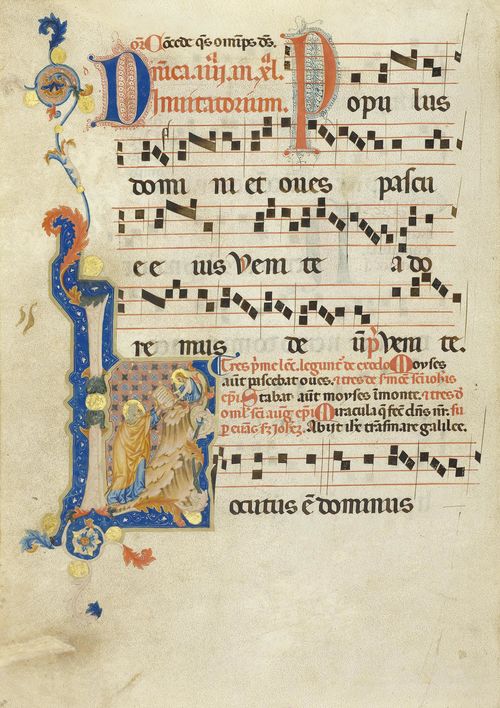 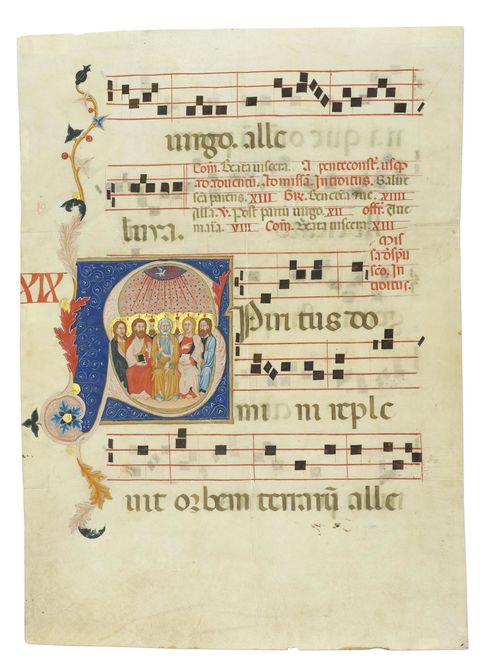 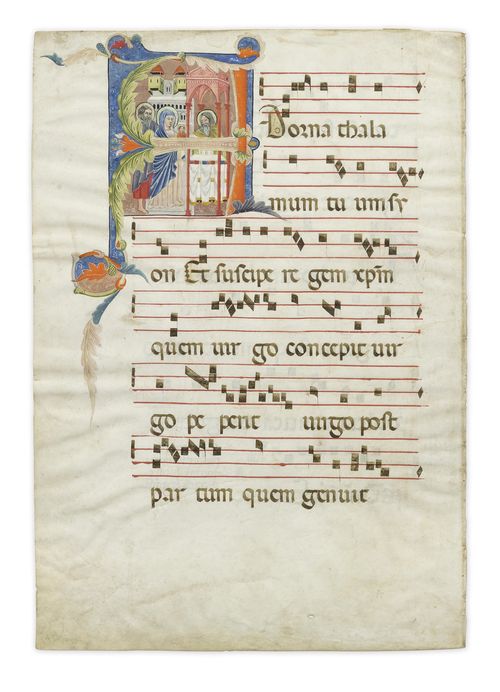 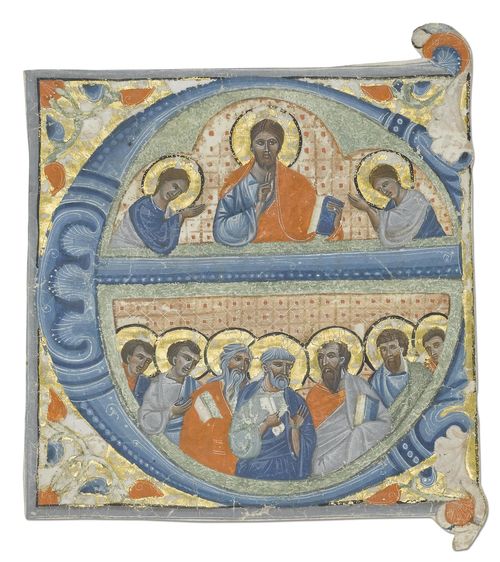 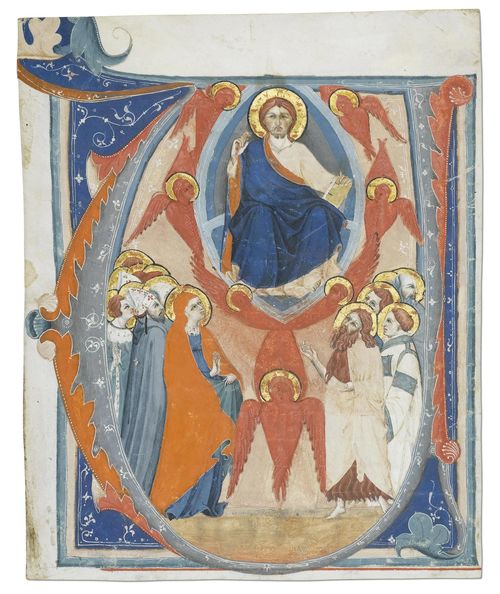 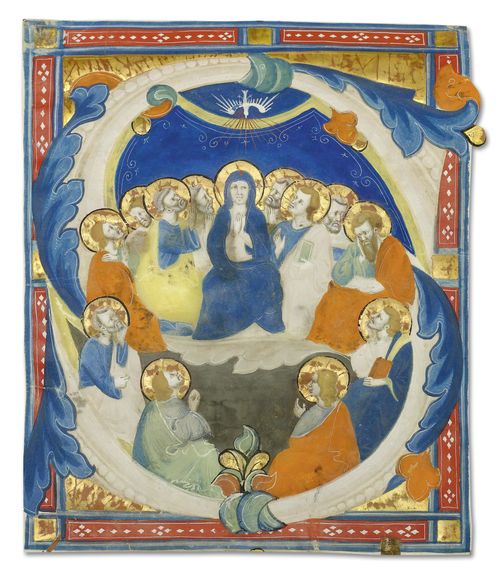 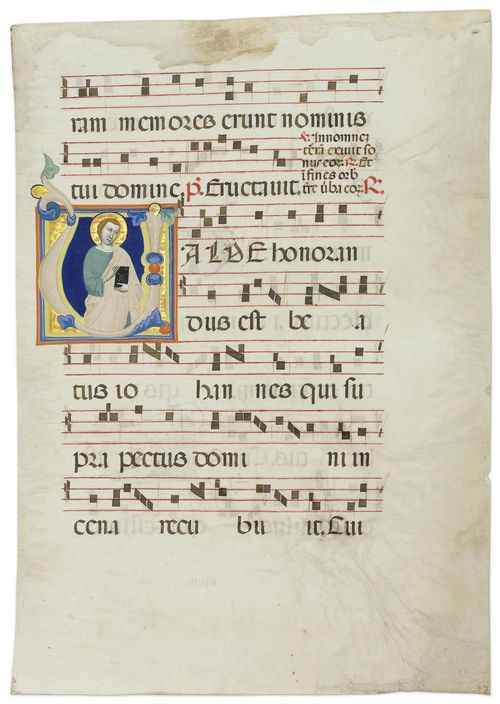 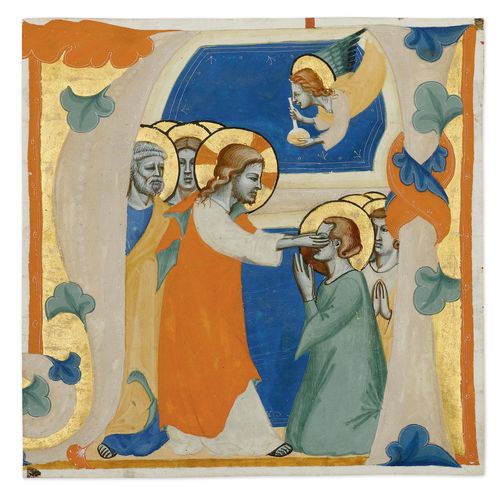 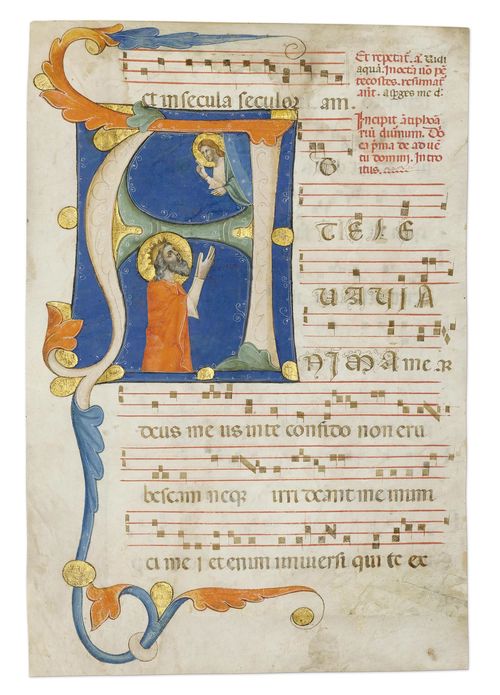 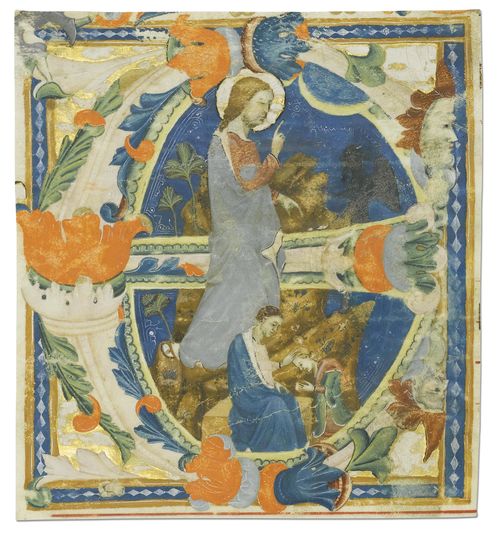 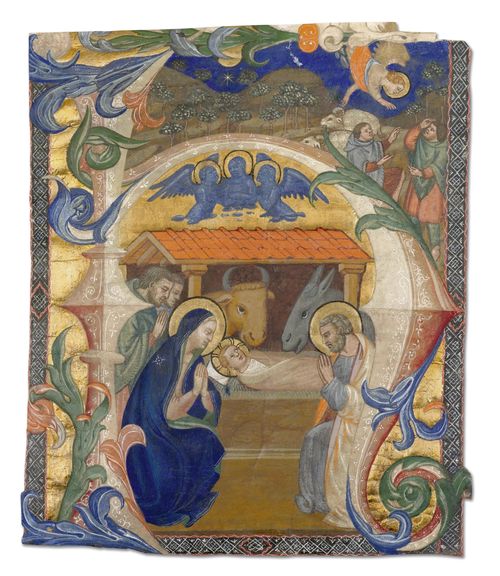 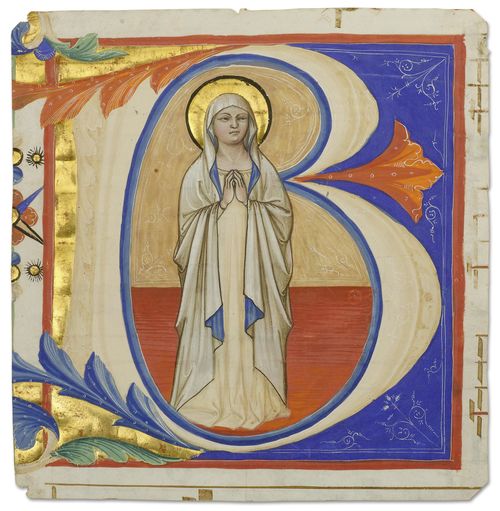 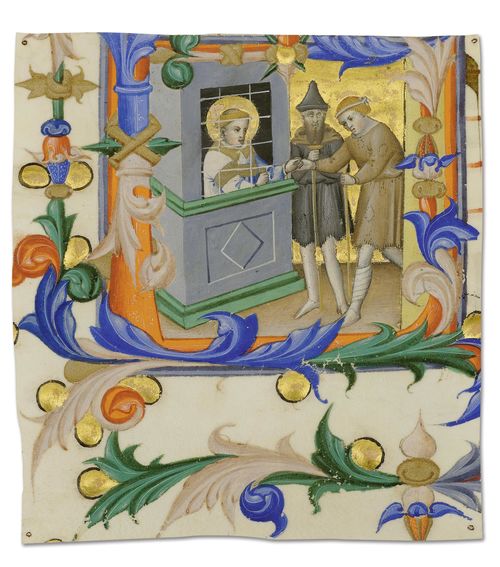 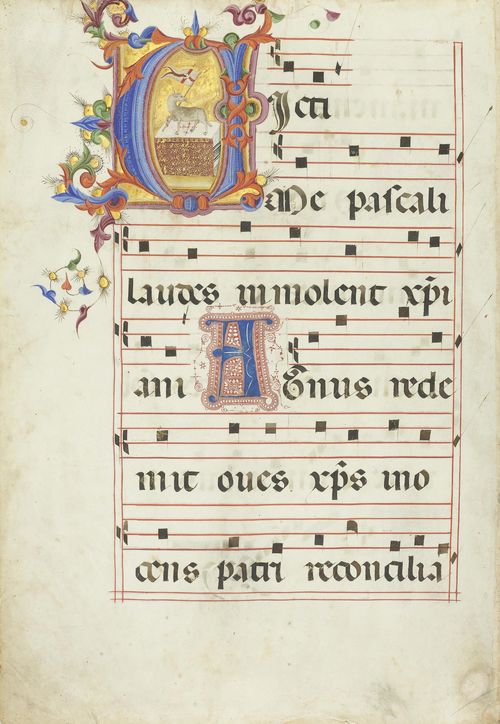 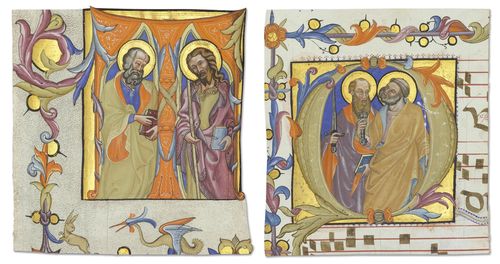 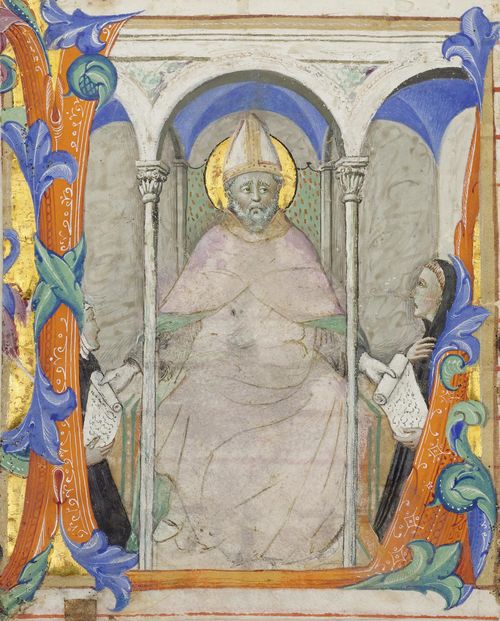